Can't even take a piss in peace. 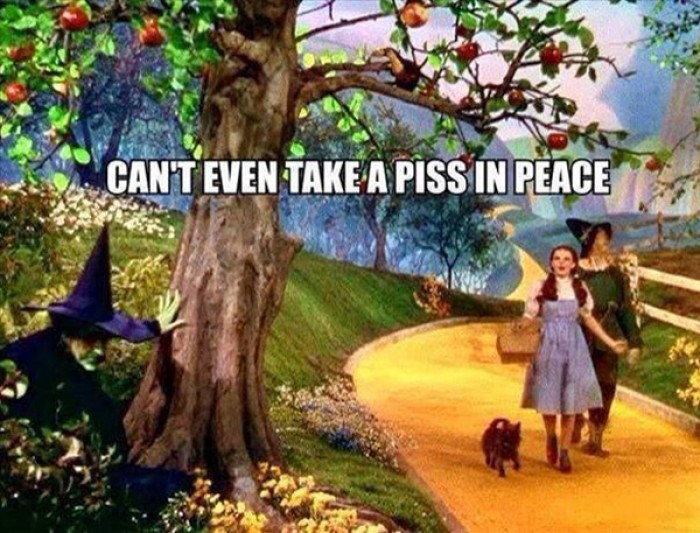 Can't even take a piss in peace. The witch from The Wizard of Oz is pissed :) The Wizard of Oz is a 1939 American musical fantasy film produced by Metro-Goldwyn-Mayer, and the most well-known and commercially successful adaptation based on the 1900 novel The Wonderful Wizard of Oz by L. Frank Baum. The film stars Judy Garland; Terry the dog, billed as Toto; Ray Bolger, Jack Haley, Bert Lahr, Frank Morgan, Billie Burke, Margaret Hamilton, with Charley Grapewin and Clara Blandick, and the Singer Midgets as the Munchkins, with Pat Walshe as leader of the flying monkeys. Notable for its use of Technicolor, fantasy storytelling, musical score and unusual characters, over the years it has become one of the best known of all films and part of American popular culture. It also featured in cinema what may be for the time the most elaborate use of character make-ups and special effects.
It was not a box office success on its initial release, earning only $3,017,000 on a $2,777,000 budget, despite receiving largely positive reviews.